Polygamy, patriarchy and the struggle for democracy in Zimbabwe 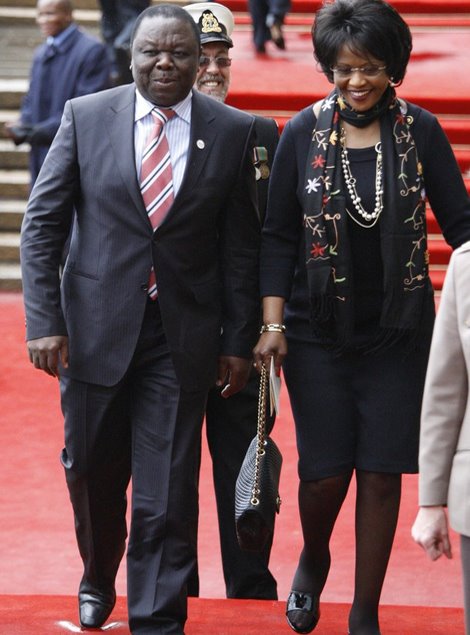 
This post arose out of a debate with colleagues on the Association of Zimbabwe Journalists UK googlegroup following allegations on The Zimbabwe Times website that Zimbabwean Prime Minister Morgan Tsvangirai is believed to have a second wife.
Concerning polygamy, it's beyond argument that this practice is the hallmark of patriarchy. Indeed, the existence of laws that legalise polygamy in Zimbabwe points to the endurance of patriarchal forms of social relations in our society and culture. It is an unequal form of social relations and has grave ramifications on economic and other power relations between men and women. This is why campaigners for women's rights in Zimbabwe and elsewhere take issue with it.

Those who benefit from it want it to stay and tradition is deployed as the justification for its continued existence; but for those for whom it has a harvest of subjection, emasculation and disempowerment, it is a system to be fought and crushed and consigned to the dustbins of history.

In the Black Insider, Marechera said of tradition and custom that they're like parasitic leeches and lice that exist only on account of the lifeblood they suck from their hosts. Denied this opportunity, they are incapable of any independent existence of their own. There are certain cultural practices and traditions, such as polygamy, that are like these leeches and lice whose lives the entrenched interests in society strive to preserve only because they're beneficiaries of such dependent social constructs. And so the vested interests continue to want everyone to venerate these parasitic social constructs as though they're sacred and indispensable to our lives whilst the reality is, in fact, the other way round!

I don't see why or how polygamy should be good for any woman. If I were one, I'd rail against it and want to smash it to smithereens!

The association between polygamy, partiarchy and the subjection of women is indisputably strong. Power relations between a man and his wives are tilted in favour of the patriarch; he stands more than equal to each one of them as individuals and also to all of them as a collective.

Any struggle to democratise a polity necessarily invokes the democratisation of its society. Recognising and respecting individual rights and freedoms is the basis for a liberal culture and politics. That is contradictory, in principle, to a polygamist's patriarchal lordship over his wives. How he percieves relations between the sexes has a bearing on what social system he dreams of realising in his struggle. His conception of individual freedom in the kind of democratic state that he endeavours for naturally has certain boundaries imposed by his own reality and imagination (in this regard, I seriously doubt Zuma's capacity to advance the interests of women, such as taking South Africa's heinous rape culture to task).

I'm not sure whether MDC MP Timothy Mubhawu is a polygamist or not, but he certainly subscribes to a patriarchal worldview that sees women as unequal to men (a reality that polygamy captures). During last year's heated Parliamentary debate over the Domestic Violence Bill, Mubhawu urged the national assembly not to pass the bill aimed at stamping out domestic violence because women were inferior to men.

"I stand here representing God the Almighty. Women are not equal to men. This is a dangerous bill, and let it be known in Zimbabwe that the rights, privileges and status of men are gone."

There is definitely cause for concern when an MP who represents a party that purports to lead Zimbabwe's campaign for democratic change utters such farcical nonsense.

Tony Blair’s recently published memoir, A Journey, thrust the former British Prime Minister (left) back into familiar territory –the vortex of controversy. Pelted with eggs and shoes at a book signing in Dublin earlier this month, the man with the infamous grin thought better than to face off angry anti-war protesters and proceeded to cancel his book launch party at the Tate Modern in London . Like Marmite - an extremely salty and savoury British dark brown spread of sticky consistency, with a distinctive, powerful flavour – people either love or hate Blair. As angry anti-war protesters vented their spleen outside Waterstones bookshops, inside hordes of avid readers snapped up more copies of the former premier’s book on the first day of its release than fellow New Labour architect Peter Mandelson’s memoirs sold in three weeks. The attention directed at Blair is warranted. The middle England magician’s ‘big tent’ strategy – which positioned New Labour on the centre-ground to draw

On the question of devolution in Zimbabwe

I think greater devolution of powers and responsibilities to the regions would be a good tonic for national development, both economically and democratically. The principle of participatory democracy in governance and economic development would be more effectively harnessed and expressed. Our highly centralised state lumbers under the weight of patronage, corruption, authoritarianism and policy failure. Central government can retain full control of national security and overall national economic and development policy, especially with respect to strategic directions and international trade. But certainly, the regions should enjoy more direct say-so over local priorities, receiving budgetary support from central government to meet local needs. I think we could see less violence in elections for national leadership under a devolved system of government , and those competing for local positions would be less persuaded to deploy violence in a localised context where the distance betwee